We at the Nerd Lair had our inaugural Meatsgiving event over this past weekend. There’s a story behind the event (as always)… see, friends of ours have a daughter who is a militant vegan. As such, there was a vegan lasagna at their Thanksgiving and our friends were deprived of their rightful, meaty goodness.

The High Priestess and I thought it would be fun to have a small get-together and make sure there was plenty of tasty animal to consume. Although life gets in the way, we finally had our date and things were on. 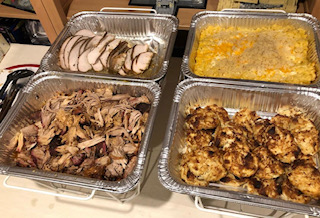 We opted for a varied menu… most of which was prepared on the Traeger. We had pulled pork, turkey breast, crab cakes, macaroni & cheese, and buttermilk cornbread. All but the crab cakes were done on the Traeger and we were pretty pleased with the outcome.

The weak link was the cornbread, in my opinion. It came out very dense, a smidge dry and it could’ve used a little more sweetening. I’m thinking for future reference to not mix it quite so well, which might make it a little lighter, and also to up the sugar and lower the cook time.

The pork was a complete success. I started with a pair of boneless pork shoulders from Costco. They did not require much trimming. I made a 50/50 mix of Traeger rub and Traeger’s Pork & Poultry rub. Got a good coating on the pork and put them in a hotel pan. Dumped a cup of apple juice in the bottom and set the grill to 225 and Super Smoke. Left the pork cook, except for a fresh spritz of apple juice every 45 minutes or so. This led to an amazing looking bark. Once the internal temp got to 165 degrees, I separated the shoulders in to individual half pans, strained the juices and divided them between the shoulders. Covered with foil, bumped grill to 275 and kept an eye on my internal temperature.

Once the internal reached 204 degrees, I did a bad thing. I brought in the pans and realized I didn’t have a cooler quite big enough for two pans, so I left them rest a few minutes on the counter before shredding. Pork looked amazing, and tasted even better.

While I was making the pork, I was also doing a turkey breast roast. My inspiration was the turkey breast at Mission BBQ. To that goal, I opted to go with a Butterball turkey breast roast. Weighs in around 3-4 lbs., so not too huge, but easier to serve than having to carve a whole bird and deal with the bones. Defrosted this over a couple of days and used the Traeger Fin & Feather rub.

One word about rubs… the Traeger rubs have all been reformulated to use less sodium, which is why I like to use them. Well, that and they taste pretty good. I’d like to work more on making my own rubs and sauces as I move forward in the great BBQ adventure.

I’ve written about the macaroni & cheese before, so I won’t belabor that point. I made a slight tweak to the recipe… instead of using shredded cheddar, I came across a block of smoked cheddar at the store, so I grated that and it imparted a bit of extra smokiness. Not sure that really made for a better taste, so I probably will not do that again.

The final entry was the High Priestess’ crab cakes. She has a way of making them with just enough binding that they stay together, yet not so much binding that you notice. Basically, you get crabby goodness and not a lot of garbage. Didn’t do those on the Traeger as she likes to broil them and the Traeger doesn’t get quite hot enough to get the kind of top crust she likes. 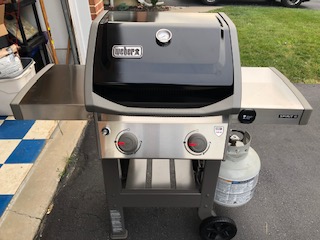 In other news, my only complaints about the Traeger come when I want to do something quick that needs high heat. You know, if we feel like hot dogs or burgers, or if I’m doing reverse seared steak. So, we added a new member to the grill roster. A small Weber Spirit II. It’s small, but should be just enough for its role. Plus, I got to assemble it. It was a win/win.

So, Meatsgiving was a success, maybe to be repeated in the future. Until the next time, keep grillin!