2018 is in the books and we had another Traeger Christmas at the Nerd Lair.

It was actually a lot of Traegering during the month of December. 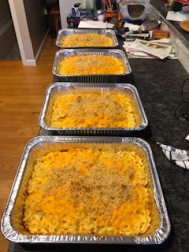 The High Priestess and I hosted our annual Festivus party. We tend to do this a little earlier in the month, since people seem to be busy around the actual holiday. We usually have an expansive buffet, and this year we added the Traeger smoked macaroni and cheese. I made four half pans and there was one serving left.

Not one tray, one smallish serving.

Might need to increase the quantity for next year.

It’s really not a bad recipe to throw together. It’s a little messy, but that’s mac & cheese. I’ve used the Traeger recipe as a base and tweaked it to my own tastes. I’ll include it later in the post. 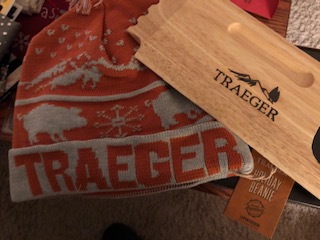 Christmas Eve rolled around and the High Priestess and I did our gift exchange. She had the good fortune to accidentally be passing by our preferred Traeger dealer and on a whim, stopped in. She found the Holy Grail (the wooden grill scrape that I was searching for) and a sweet beanie hat for when I want to do a cold weather cook. Or shovel snow. Or just be crazy stylish. There were also a couple of promising rubs that I didn’t have in my collection. 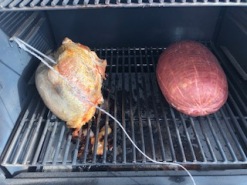 Didn’t need the hat on Christmas day. Had a turkey breast and a ham. Ham’s easy… put it in the Traeger and you’re golden. Turkey takes a bit more preparation… but you can do as much or as little as you want.

I’m not a big fan of overwhelming the natural flavor of the meat with too much rub. I think that the rub should complement the natural taste of the meat. So, I opted to do the turkey with a light coating of Pork and Poultry rub, as well as oiling up the skin. I find that rubbing the skin down with olive oil can really add a nice bit of crispiness to the skin, as well as providing a nice presentation. I opt to rub the bird under the skin and throw some rub into the cavity. 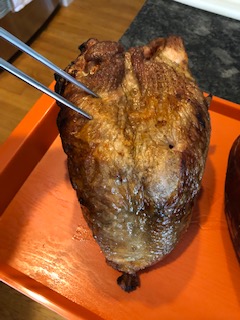 This time around, I opted to smoke with hickory pellets, instead of the turkey blend. Turkey can withstand the hickory and it works well with the pork and poultry rub. There are some folks who swear by mesquite… I don’t hate it, but it’s not my favorite.

I’m happy with the results. The bird was moist and flavorful and the ham was off the charts. One of the biggest features of the Timberline is the Super Smoke mode, which really loads the food up with that smoky goodness. I ran the grill at 245 degrees (plus Super Smoke) for around an hour, then upped it to 350 to finish. Even got a decent smoke ring.