The High Priestess and I had the opportunity to take a Traeger Shop Class this past weekend. For those who don’t know, it’s a great place for grillheads of all types to learn from the pros and taste some meaty goodness. While it’s geared toward Traeger owners, there’s always something that can be learned and applied to whatever kind of grill you use.

This is my third go-around with the shop class. I attended two last summer and enjoyed them so much, I dragged the High Priestess along. She came away favorably impressed.

You’re probably wondering what exactly is a shop class. Well, here’s the overview from the Traeger website:

“Take home all the skills you need to achieve BBQ greatness. Each Traeger Shop Class is taught by an award-winning pitmaster, and provides detailed, interactive instruction, and tips and tricks of the trade, to take your BBQ skills to the next level. Bask in BBQ greatness while you feast on mouth-watering samples, take notes in your BBQ manual, and even score some special shop class swag to take home.”

My first two classes were originally scheduled to be taught by Chad Ward, of Whiskey Bent BBQ, but he was replaced by the legendary Danielle “DivaQ” Bennett, and let me just say that this woman is a complete badass and stellar teacher. She’s knowledgeable, sarcastic, and dedicated to the craft. She also doesn’t beat around the bush. So, when I saw she was teaching the local shop class again, I jumped on that. Not only do you learn, you get to taste her ribs and brisket, which should be a food group of their own. 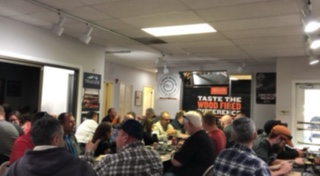 The local class is held at Lancaster BBQ Supply, a local Traeger Platinum Dealer. The owners, Tom & Michelle Perelka, have a great location where they set up a big tent and there’s plenty of room. Or so I thought. This go-around, well, some biblical weather pretty much trashed the tent, so they had to move it inside. We were a little more cramped, but it made for better temperature.

There’s usually a few standard things…a talk from the regional rep about the newest Traeger products, a cocktail made with smoked ingredients, time to check out the new hardware, then into the demonstrations. They are usually at a location for two classes… this year the first class includes Tito’s vodka honey-glazed grapefruit buck, smoked peppered jerky, BBQ pulled pork, spatchcock chicken, reverse seared ribeye and St. Louis-style ribs.

The second class includes the grapefruit buck, jerky, ribeye and ribs, but adds in smoked salmon and brisket. There’s some crossover, but enough differences to make a double feature worth the time and money.

There are breaks in the program, and drinks are provided. Water, soft drinks, and since there’s a partnership with Leinenkugel, a selection of their beers are available. This is included as part of the cost, so drink up (but don’t be stupid about it).

The four-hour class goes quickly. This time, the repartee between DivaQ and the random propane guy was part of the fun. You get to keep the recipe book (which has all the recipes from both sessions) and you get some decent swag. This year you got a spice rub sampler, a magnetic temperature guide, various stickers, buttons and magnets, as well as a small metal Traeger mug. There’s also shop class specials, like 10% off accessories or special deals on new Traeger grills. 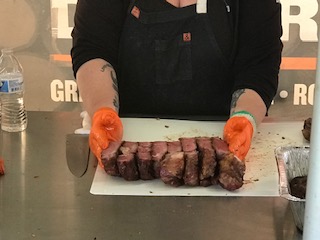 As a fitting finale, they raffle off the prepared (uncooked) meat at the end of class. We came home with a really nice ribeye that I reverse seared yesterday for lunch. Also, if you made a post with a certain hashtag to particular social media sites, you got an official shop class t-shirt.

In short, I find these classes to be informative and fun. I’ve met some good people through the class, and have learned from one of the most respected pitmasters in the game. I will probably attend class next year as well, because you should never stop learning.

DivaQ’s cookbook can be purchased online at the following links: